The Supreme Court has ruled that Shamima Begum, who left the UK to join the Islamic State group when she was 15, will not be allowed to return to the UK whilst she battles to have her British citizenship restored. In a unanimous ruling, the court said that Begum’s rights had not been breached when she was refused permission to return to the UK.

Begum was stripped of her British citizenship in 2019 by the then Home Secretary Sajid Javid. In Summer 2020, she asked to return to the UK so that she could appeal the revocation of her citizenship. In July the Court of Appeal ruled that she should be allowed to return to the UK as she couldn’t effectively appeal against the decision from where she is currently located.  Currently, Begum is being held in a detention camp in North Syria.

The Home Office appealed the court’s decision to the Supreme Court, arguing that allowing her to return to the UK would create a significant national security risk.

President of the Supreme Court, Lord Reed, said that instead of bringing Begum back to the UK, her legal battle over her citizenship should be put on pause until she is in a safer situation to be able to take part. He said: 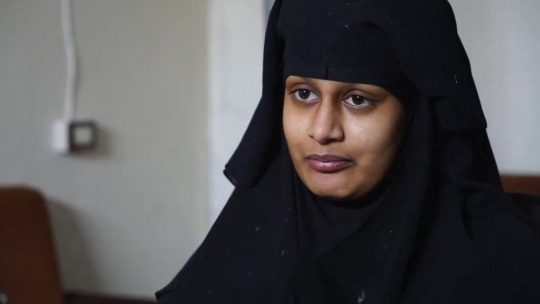 Shamima Begum left east London with two other girls in 2015 to travel to Syria, where they joined the Islamic State group (Image credit: BBC News)